Frankfurt am Main has a single big Christmas market in the historic quarter of the city around Römerburg and Paulsplatz.

The actual dimensions of the market stretch from the square at the Hauptwache down to the quayside on the river.

Like most of the Advent events, the market opens towards the end of November and stretches through to the day before Christmas Eve. During the time of the market, authorities reckon with around 3 million visitors.

The history of the Frankfurt market stretches back to the end of the 14th century, when mystery plays were performed on the Römerberg. 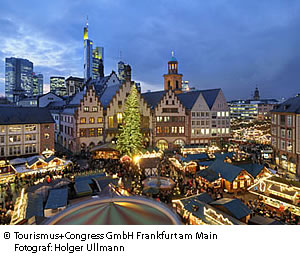 Over the centuries, the Frankfurt market has developed its own specialities. Two of them are based on baked marzipan mixes: Brenten, which are rectangular, and Bettmännchen, which are mounds with almonds on the side. Another are the strange Quetschemännchen, which are figures made out of prunes and nuts. These go back to the days when young men would send these figures to the girls they fancied. If the figure was not returned to sender, he knew that he had a chance to win the hand of the girl.

Frankfurt is also one of the markets which has exported its Christmas commercial expertise to other countries. The Frankfurt market has organised the traditional German markets in a number of British cities: Manchester, Edinburgh, Birmingham, Leeds, Nottingham and Bristol, starting with Birmingham back in 1997.

Other Things To Do in Frankfurt

Look at what remains of the history of the city. Frankfurt, as a major financial centre with skyscrapers marking the scenery, has a reputation as a booming modern city. But in the old town there is still plenty to see and do if you plan on seeking out the historic buildings. The tourist office, located on the Römerburg and at the main train station, offers a good variety of tours for the individual visitor. (There is even a Christmas Market tour!) 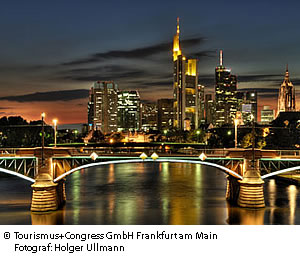 Visit the Stock Exchange. The Frankfurt Stock Exchange is part of Frankfurt's heritage as a financial and banking centre. It is by far the largest securities trading platform in Germany and one of the most important in Europe. The Exchange Visitors' Centre offers introductory tours and a chance to view the trading floor - registration in advance is required.

Get an aerial view of the ancient and modern parts of the city. With all the skyscrapers, it would be a shame not to take advantage of the views of the city available. The Main Tower has an observation platform at 200m which attracts more than 300,000 visitors a year.

Plan Your Own Christmas Market Break in Frankfurt

Somewhat surprisingly for visitors, Frankfurt Airport is by far the busiest airport in Germany. It is the main hub for national carrier Lufthansa and also has massive freight traffic. It is located just over 10km to the southwest of the city and connects to the city via the regional S-Bahn service.

Frankfurt Hauptbahnhof, the main railway station, is also the busiest in Germany (in terms of traffic movements - Hamburg is slightly bigger in terms of passengers). The station is situated to the southwest of the city centre and obviously has connections all over the country. The city has an S-Bahn (regional trains), U-Bahn (underground trains) and tram service and these are integrated into a common ticket service by the RMV (Rhein-Main-Verkehrsverbund).