Visit the Christmas Markets in Berlin
Take an Advent break and choose from more than 500 city apartments of all standards. No reservation fees.
Check availability

Berlin's Christmas markets reflect its status as the nation's capital and as its largest city. It boasts a wide variety of locations dotted around the city as well as different styles of market.

There are more than 60 markets that open towards the end of November and, in some cases, don't close until the end of December.

There are small markets for the local communities in the city, trendy designer markets and 'alternative' markets. 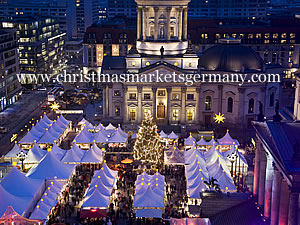 Here we've just chosen to feature some of the better-known ones, especially those that have their own websites.

Christmas Magic at the Gendarmenmarkt

The Weihnachtszauber market is a little bit at the luxury end of the scale, concentrating on gourmet food and handmade goods. The location is in the square between the French and German cathedrals and the Berlin Concert Hall.
Dates: 21.11.22 – 31.12.22
Times: Sunday-Thursday: 12.00 to 22.00 (24.12 until 18.00)
Friday-Saturday: 12.00 to 23.00
Entry: Entrance fee for adults after 14.00 for music and performances
Location: Gendarmenmarkt
Website: www.weihnachtsmarkt-berlin.de

This traditional city centre Christmas market also features a Ferris wheel and an ice rink around the Neptune fountain.

The Christmas Market at Schloss Charlottenburg

This market is held in the grounds of the famous former royal palace in the commercial quarter to the west of the main city centre (known as City West).

Christmas Market on the Breitscheidplatz

This is another market in the City West area of Berlin, this time near the Gedächtniskirche (a relatively modern memorial church for a German Emperor).

This market is one of the smaller and less overtly commercial in the city and is held a little way out of the centre in Prenzlauer Berg.

Other Things To Do in Berlin

Get a good helping of culture. Berlin is filled with museums and galleries. The photo to the right is of the Museuminsel, which is an island containing five major museums and which has been declared a World Heritage site. But you could gorge yourself on history and art for a week and still not cover everything... 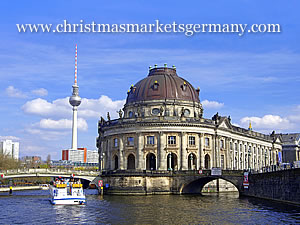 Take a look at the city and its inhabitants. Berlin, as everyone knows, was a divided city in Iron Curtain times and much was destroyed at the end of the Second World War. That means that the city has a unique juxtaposition of old German and new German, poor and nouveau riche and always rich, right and left, and the different communities from all over the world that have gathered here since it has become a united city.

Visit the parks and lakes. Those who haven't visited before don't realise how much countryside there is in and around Berlin. The Tierpark is the famous green area at the heart of the city, but the Grunewald out to the west has lakes and pine forests that will make the visitor forget that they are in one of Europe's biggest metropolises.

Plan Your Own Christmas Market Break in Berlin

Berlin has two airports (still). There has been a political scandal over delays in constructing the new Berlin airport which is now scheduled to open in autumn 2013. The new airport will be called Berlin Brandenberg Airport, but will be on the site of one of the two current airports, Berlin Schönefeld. The other, Berlin Tegel, which is currently the home of many Lufthansa and Air Berlin services, will close when the new one opens. Schönefeld is served by regional trains services, while Tegel has a bus service to connect into Berlin's public transport system.

Berlin Hauptbahnhof, the main railway station, is just to the north of the city centre. It obviously has links all over Europe and from the main railway station it is possible to link into the regional train system (the S-Bahn) and the underground rail network (the U-Bahn). All the local services, as well as buses, trams and ferries, are integrated into a common ticket service by the VBB (Verkehrsverbund Berlin-Brandenburg).